“Air huuuug!” said a friend walking gleefully towards my 5-year-old at the start of social distancing rules. “No!” he said emphatically. “The government said no hugs because of the virus!”. We looked at each other wondering where he had learnt that from. He had found the virus at school the previous day. It was ‘just there’ but it was not ‘biting’ anyone.

Air-hug: a technology aided act of riding the airwaves to be present with those we love or the vulnerable in need of care when physically apart

Two weeks later this 5-year-old would find the virus in the garden (an earwig) and it’d scuttle away. If he did find it again, he was going to squash it and it would get dead and it would not bite people and make them sick and we could go and visit people again. Three weeks later he would ask; “who is the government, where is the government, can we disobey the government and go visit some people?” Four weeks without visiting/meeting with people every virtual meeting would be punctuated with repeated whispers in my ear of “do we have the virus? Do they have the virus? So, can we go and visit? Can they come and visit? Why can’t they/we if we don’t have the virus? Will the government see us if we went to so and so’s house…?”

Now, per 5 year-old logic the virus is ‘half dead’. The government said that we can visit people. But still no hugs. At least not for everyone. But more importantly, our Corona related anxieties of living in perpetual transition are not half-dead, and may not be for some time.

Up until Covid’s disruption of social life, our home was a corridor. There were always people in and out and the children always looked forward to the next guest. Guests meant hugs, play, dessert, reading with, audience for new skills and tricks, dinner, love, acceptance, story-telling, learning. Simply put, visitors were a platform for living and learning. When that was suddenly snatched away without warning, anxiety ensued. Big conversations followed; explanations, reassurances, then acceptance, then impatience and finally lock-down problem-solving 5-year-old style; ‘let us disobey the government, or find the virus and squash it’!

No doubt this has been all of us the world over adjusting to life without whatever it is that the physical presence of people represents in our daily living. Where human presence is outlawed, people have come up with a variety of schemes to fill loneliness and remain connected.

But talking to young migrant urbanites either working or studying away from home, though air-hugs from family in home countries have been plenty, real hugs have been especially scarce. Some had just moved to a new city without a chance to make real friends when Covid 19 pushed them into sole existence far away from home. For some of them, it has been hearing the familiar voice of another human being within the same physical space they have longed for. For others it has been the feel of reassuring palms pressing against one’s back, or being able to catch another’s scent as heads rest on shoulders so that, when physically apart, they may recall it to relive the warmth and comfort of being together. Instead, there has been long empty days, with any opportunities to strike new friendships an infected dream.

Friendly strangers have also been scarce as their affability is supplanted by the fear they may be endangering lives or are an unwelcome intrusion into personal space. Social distancing rules have made us a people afraid of each other. We pass each other on the streets with lips pursed.

But a world without hugs, the technology has been a useful tool in communicating some of the messages encrypted in a hug. Vulnerability and detailed life updates are evidence of this fight to remain connected; to not be shut out of togetherness when physically apart. It is not technology that is the greater hero however, but rather the willingness to open our hearts to each other that is.

While we celebrate the freedom to be physically together again, the easing of social restrictions does not by any strides reflect equal easing of the anxieties we have been lugging around. We will, no doubt, be continually in transition after transition on this long uncertain road back to post Covid normalcy. And while it’s OK to celebrate a little freedom, the need and opportunities to care for others may have just increased.

But it is a feat we can achieve. For if we have been able to communicate what’s in a hug and more without being physically present, how much more so now for those of us who can meet face to face? But what of those we cannot meet yet? Then the air-hug is still in vogue; this technology aided act of riding the airwaves to be present with those we love or the vulnerable in need of care.

Until such a time as we can casually hug again with psycho-emotional ease, the air-hug remains both a weapon against isolation, anxiety and defeat, and a tool with which to continually strengthen and rebuild our communities.

One thought on “Air-hugs? Yeah, you gave a few today” 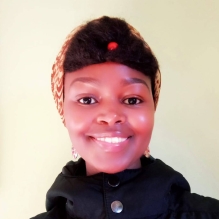 Hello,  I’m Nini, and the first thing I ever fell in love with is a river; the shallow gently flowing kind whose sand is visible beneath its clear gurgling g... Read more →